AFFIRMATIVE ATHLETICS was founded in 2005 by Executive Director Rob Thelusma at Camp Fred Miller; a Malibu juvenile probation facility housing mostly Black and Latino teenage boys (ages 13 – 18).  Tensions are always high at these facilities.  Dissension is the norm.  Most of the incarcerated youth are emotionally distressed.  And during this time, his poetry writing class was the only outlet available to constructively help them deal with their life frustrations and destructive behaviors. 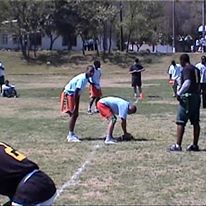 Realizing the youth needed more than writing in their neglected development inspired him to start the AFFIRMATIVE FLAG FOOTBALL program with just four teams.  Half of the youth in his writing program signed up and began chronicling their weekly game experiences in class.  Some writings were published in the weekly newsletters for the probation staff to get to know the youth in a different yet positive way.  This made its first ever eight-week run extremely successful as the entire probation staff noticed the kid’s positive shifts in attitude and the much decreased dorm fighting.

Rob realized he was on to something and soon began developing a structured writing curriculum to accompany the sports aspect of the program.

In 2006, the program moved to Camp Karl Holton (Sylmar).  It instantly had to accommodate the high demand and grew from four to eight teams.  This twelve-week run became everything the population wanted and needed; helping transform the camp’s already negative culture into a supportive, peaceful environment between the youth and probation staff.

Soon, the same probation staff convinced Rob into organizing the AFFIRMATIVE ATHLETICS BASKETBALL program.  An inaugural six-week tournament along with the writing curriculum charged positive energy into the facility environment.  Dorm fighting became almost non-existent and the youth were inspired to take on more leadership roles around the camp. 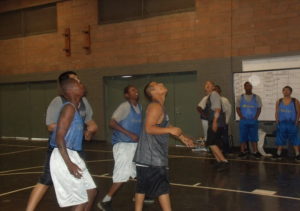 Since then, Affirmative Athletics has had phenomenal success in mentoring over four-hundred young incarcerated boys at different probation facilities.  For more visibility, we are now working with Los Angeles continuing education programs to provide an affirming curriculum for students needing structure and mentoring.